Here are 10 facts about Tourette Syndrome that you probably didn’t know. 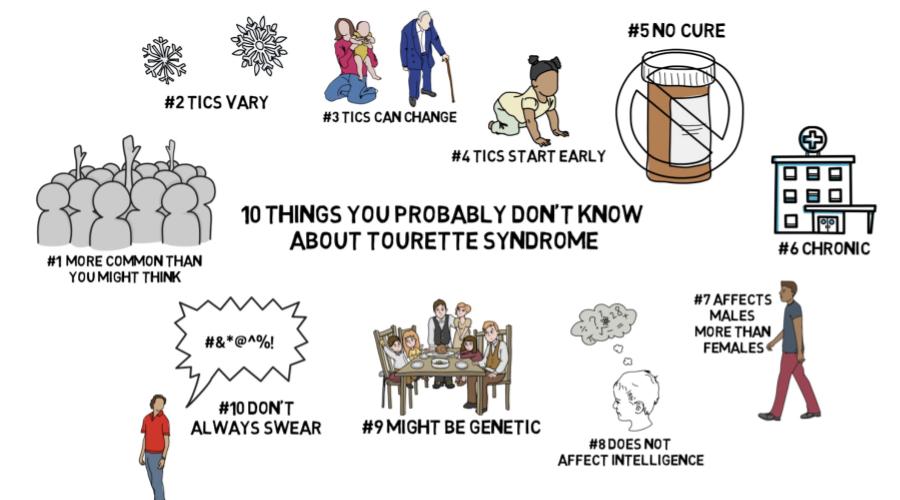 1) Tourette’s Is As Common As Autism

Tourette Syndrome is more common than you might think. 1% of children in America, have some form of Tourette Syndrome. So there is a significant chance that several people in your local elementary school, middle school, or high school struggle with Tourette’s. That statistic is the same for children with Autism, but we’re likely more aware of Autism because it’s signs and symptoms generally more consistent and noticeable than the small tics of Tourette Syndrome are.

2) Each Person Has Unique Tics

Ticks vary from person to person. People with Tourette Syndrome are like snowflakes–unique. Two people may have similar tics, but no two people will have the exact same combination of tics.

3) Ticks Can Change Over The Course Of A Lifetime

Ticks can change throughout your lifetime. When you’re young, you may have completely different ticks than you’ll have 20 years down the road. Tics can also vary in severity.

4) Tics Appear In The Early Stages Of Life

Tics generally start appearing at early stages of life. Usually, they start affecting children between the ages of 5 and 10.

5) There Is No Cure and No Treatment

There is currently no cure for Tourette Syndrome. And unlike most illnesses, there is no treatment or drug that can alleviate the symptoms.

6) Tourette’s Is A Lifelong Disability

Tourette Syndrome is chronic. That means that, although tics may change or start to disappear, the condition will likely be lifelong.

Tourette Syndrome affects males more than females. Although both men and women struggle with Tourette’s, about 4 males are diagnosed for every female diagnosis.

8) Tourette’s Does Not Affect Intelligence

Tourette Syndrome might be genetic. Research is still being done, but evidence from recent studies shows that it is likely Tourette Syndrome is an inherited disorder. Some researchers argue that combinations of genes and the environment a child grows up in can influence the presence of Tourette Syndrome.