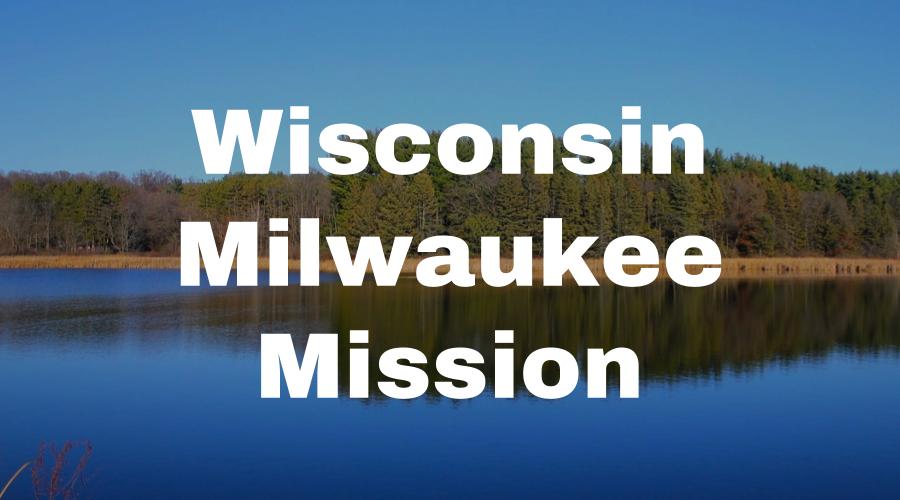 Here’s a recent address for the Milwaukee Mission. We try to keep this information up to date, but it’s a good idea to check the address with several sources, including your mission packet or the mission office.

Here’s a list of LDS missionary blogs for the Milwaukee Mission. This list includes the missionary’s name, URL and when their blog was updated.

Here are T-shirts for the Wisconsin Milwaukee Mission!

Shirt designs include Milwaukee Mission logo/emblem shirts and Called to Serve shirts. The shirts make great gifts for pre-missionaries, returned missionaries and missionaries currently serving. LDS Mission shirts come in all sizes: Small, Medium, Large, Extra Large, up to 4XL.  The mission designs are printed on white shirts and are shipped to you.

*Simply click on a shirt design to view the details and submit an order. The designs on mission t-shirts may also be printed on other LDS mission gifts, including: Milwaukee missionary aprons, Christmas stockings, ties, pillow cases, teddy bears and Christmas ornaments. 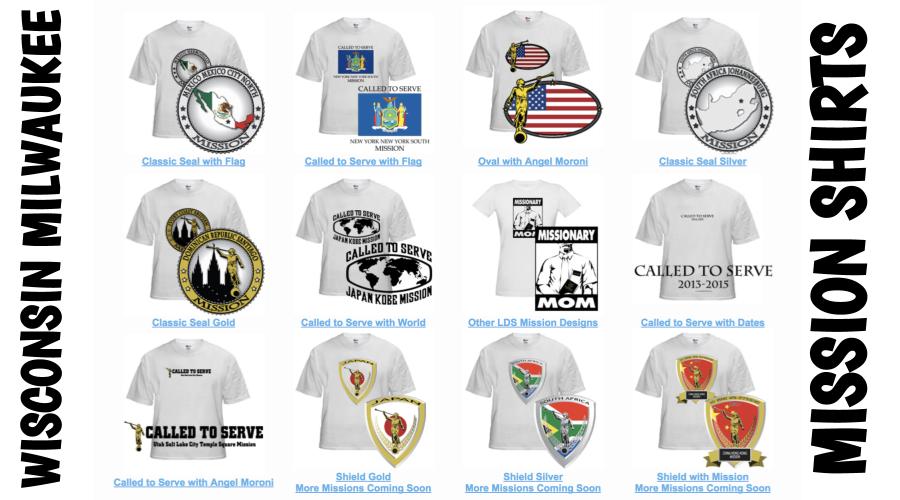 Here’s a list of current and past Mission Presidents of the Milwaukee Mission.

Here are survey responses from Milwaukee RMs, to give you a snapshot into what it’s like to live in the mission.

What are some interesting facts about the Milwaukee Mission?

The Hmong culture is pretty laid back. I was worried about the differences, but it’s not bad at all. They eat with their hands, but they jokingly refer to them as Hmong chopsticks. The biggest thing is taking your shoes off at the door and respecting them. Be polite and no one will get offended. I didn’t have to remember too many cultural rules. A lot of Hmong people live in southern China. A lot live in Vietnam, Laos, and Thailand as well. The reason why they’re in Wisconsin is interesting. There are a lot in California and Minnesota as well. When we were in the Vietnam war, the CIA went into the mountains where the Hmong people lived and trained them to rescue downed American pilots and how to defend important bases or areas. A lot of Hmong people gave up their lives for that because they believed that the Americans would free them from the Communists. Eventually, we pulled out of Vietnam and the Communists started a genocide of the Hmong people. No one really knows that. It’s not in our history books. The Communists started burning their villages down and killing men, women, and children. They had to flee. They had to escape to Thailand across the Mekong river. A lot of them were hunted down in the process. I remember hearing some really horrible stories of what happened to families that tried to escape. Crossing the river, they would have babies strapped to their backs and they would exit the river and the babies would be dead. They were shot. A lot made it to the United States as refugees. Don’t ask me why they’re in those random states, but they’ve gone through a lot to get here. I remember reading the Book of Mormon when it talks about how they crossed the ocean in the boat that Nephi built, and he said that no one would come to this land without inspiration from God. Hmong culture is really interesting. They don’t have a god and they don’t believe in a savior or anything like that. They have shamans. There are only 18 clans and their last name determines which clan they are in. The shaman would take care of them. If they got sick, it meant that they lost a part of their spirit. So the shaman would come over and perform a ritual and they would have to barter with the spirits and they have to sacrifice an animal in order to become healthy. They would usually sacrifice a chicken or a pig or on really serious occasions a cow. They also believe in animism which is like spirits are everywhere. They always have spirit paper over their walls. The purpose would be to have successful careers, or keep out bad spirits. They hang them right above their front door. They have corn hanging outside too. I found a dog skull hanging on a door. I found horns from a goat hanging on a door. I’ve seen a lot of things hanging on doors and they are supposed to keep out bad spirits. Trying to teach them about God is very interesting. It can be very challenging. It was definitely rewarding when you could find someone that believed in God. I remember teaching young kids that were just super interested, but their parents were dead set against it and would disown them if they joined. If the younger generation were to join, it would mean that their spirits would be lost forever and they couldn’t take care of their parents in the afterlife. It’s really hard to get people to commit to join the Church because of that.

Milwaukee is great. I loved the feeling of living in the city. We covered a large area, so we had some cute little towns we covered as well. They have braut fest, and a lot of the members will volunteer there to raise money for scouting and whatnot. I had never tried a braut before my mission. They’re better than J Dawgs. Sauerkraut is good. They have the best root beer ever. I love it. There are a lot of people of German descent there. Milwaukee was my first area. Everything was so new to me. Having the members being so kind was really comforting to me. We put twinkle lights up. I think it’s important to do things that make you happy while you’re on your mission while still being exactly obedient. The people are kind of set in their ways, but they’re very open to learning from the missionaries.

I served in Madison, which also had the Verona area. It was the cutest place and it had the cutest library. It was really clean and well put together and everyone is really family oriented. Madison has a lot of single people that work really hard and there aren’t as many families. When they make the time to meet with you it’s really cool. I lived right by UW. It’s a party school, but talking with them was really effective. Being so close to the university was a good experience. The institute building was right across from campus. Everyone thinks Madison is really liberal, but I didn’t see that at all. I saw and taught a lot of families there. The capitol is so beautiful. There were some other missionaries teaching someone that worked there, so we got a really cool tour of it. Madison is pretty segregated actually. The gospel is all inclusive, and it doesn’t matter what we look like on the outside.

I love Sheboygan a lot. The first night, I fell asleep and I started saying all of the funny names of the cities. There is a toilet museum there. If you’ve ever heard of Kohler, it’s in the city of Sheboygan. It’s the name of a small town there. You can walk around that museum on P Day. Sheboygan is the number one city for fresh water surfing in the world. People actually come from around the world to surf there believe it or not. There are so many funny things about Sheboygan. A lot of people from Milwaukee have moved to Sheboygan, and that has really changed the culture. We had the best neighbors. They were this cute older couple. They taught us what a pudgie pie is. It’s kind of like a cheeseburger cooked over a fire. You can make dessert ones too though.

It’s between Minnesota and Michigan right below Canada. Our mission covers from the Minnesota border and up. From the top of the mission to the bottom is like ten hours. There are nine zones which are almost the same as the stakes. All of the sisters are English speaking. There are a dozen or so Spanish areas. There are also a few Hmong speakers. I got to serve in a couple wards where English and Hmong come together. The closest temple is the Chicago temple and that’s maybe an hour from Milwaukee. We were allowed to go once every six months if a member drove us and we lived within two hours driving. They would tell us that we were there for the living, not for the dead, so we couldn’t go to the temple that often.

The people are my favorite. When I got released, my stake president asked me about the people and I started crying because I love them so much and they have so much faith. It’s a very faith filled dedicated community. It was such a joy to work with them. I loved it. They are so funny. They have the cutest accent. I thought it was adorable. Most people there are from Wisconsin. They’re very loyal people and a little stubborn. They stick to what they are raised in. They’re honest and pretty up front. I appreciated the honesty. They’re the best people and they’re so nice. They’re good people and are hard working. The members there are amazing and they’re so missionary minded.

Before my mission I knew five things about Wisconsin. I knew about the cold, the Packers, beers, brauts, and cheese. It’s pretty cold. My last winter there was record breaking cold. Looking back, I remember it being cold, but just get a good coat with a zipper with a flap over the zipper. A hood with the fake fur is good. Get gloves and good warm fur lined boots. They kept me alive and kept me warm Moms are always sending hand warmers and thermal stuff. We always had cars so it wasn’t that bad. It’s so hot in the summer too and no one tells you that. I didn’t bring any short sleeve shirts. It’s pretty humid in the summer too. Spring and fall are just gorgeous. Milwaukee is very much a big city. The missionaries are on buses and there are some ghetto areas. Everywhere else is pretty much farms and tiny towns. There are a lot of barns. There are some midsize cities as well. My first area was about 45 minutes south of Wisconsin. I served in Appleton which has about 85,000 people. I was also in the city of Green Bay, which isn’t as big of a city as you think it is. Lambo field is just there in the middle of a neighborhood. The food is very traditional. For Christmas you have to have the cranberry sauce and the turkey and the rolls. There’s a lot of beer. They love their beer. I didn’t think the cheese was that big of a deal, but the main thing that I noticed is that the grocery stores have like a whole aisle of cheeses.