Here are free resources about the California Oakland-San Francisco Mission: 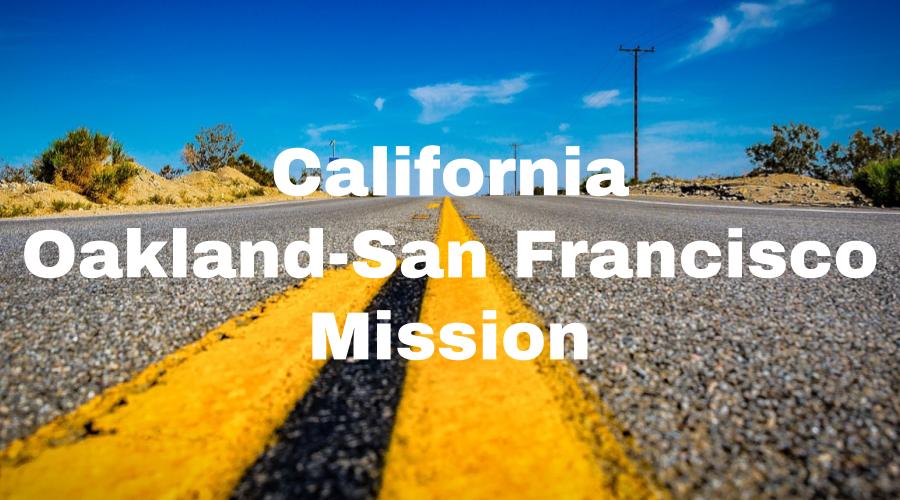 Here’s a recent address for the California Oakland-San Francisco Mission. We try to keep this info up to date, but it’s a good idea to check the address with several sources, including your mission packet or the mission office.

Here’s a list of LDS missionary blogs for the California Oakland-San Francisco Mission. This list includes the missionary’s name, URL and when their blog was updated.

Here are T-shirts for the California Oakland-San Francisco Mission!

Shirt designs include California Oakland-San Francisco Mission logo/emblem shirts and Called to Serve shirts. The shirts make great gifts for pre-missionaries, returned missionaries and missionaries currently serving. LDS Mission shirts come in all sizes: Small, Medium, Large, Extra Large, up to 4XL.  The mission designs are printed on white shirts and are shipped to you.

*Simply click on a shirt design to view the details and submit an order. The designs on mission t-shirts may also be printed on other LDS mission gifts, including: California Oakland-San Francisco missionary aprons, Christmas stockings, ties, pillow cases, teddy bears and Christmas ornaments. 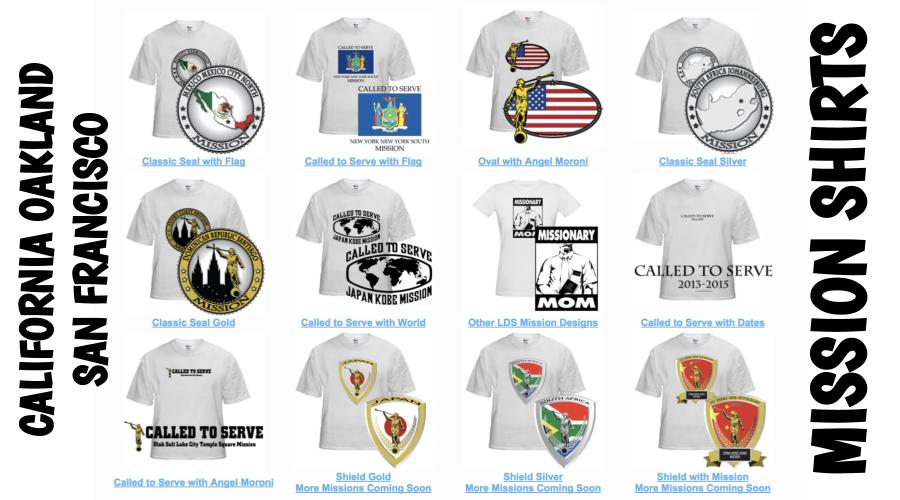 Here’s a list of current and past Mission Presidents of the California Oakland-San Francisco LDS Mission.

Here are survey responses from California Oakland-San Francisco RMs, to give you a snapshot into what it’s like to live in the mission.

What are some interesting facts about the Oakland-San Francisco Mission?

I think the boundary is the ocean. It goes down to San Jose and it goes all the way out to Brentwood and Union City. There is a beautiful temple in Oakland. The mission isn’t that big compared to others. It’s a really close-knit mission. I think we had maybe 200 missionaries. We had vistors center missionaries as well which got us to about half sisters and half elders. We had nine languages: English, Spanish, Tagalog, Fijian, Tongan, Samoan, Cantonese, Mandarin, Laotian and Cambodian. I was called English speaking but I still used my Cantonese all the time. The church is really big in California and I was surprised. There were some wards that were only a 10 minute drive around the boundaries.

The people of California are very nice. I feel like most people have good intentions. We had a lot of doors slammed on us, but I really appreciated the people who were very open. If people didn’t want to listen, they would tell us why. Or if they did want to listen they would tell us why. They opened another section of my mind to help me learn to accept all people. They are a lot more liberal and outspoken. On the east coast we don’t take much time to talk to people. People will talk to you in California and you have to listen and see what you can say to relate to them or help them. I remember one time we were in a park and this lady from Poland starting crying on our shoulders and we told her what she could do to change and  be happier. We would visit her and bring her snacks.

We would always say that it is the most diverse mission, because there are 11 languages spoken in the mission. We had missionaries speaking English, Spanish, Tagalog, Fijian, Tongan, Samoan, Cantonese, Mandarin, Laotian, Cambodian, and one more I’m forgetting right now. We get a lot of visa waiters to Brazil or a lot of other countries. We had a couple Mongolian speakers. There’s a lot of different types of people there. I remember walking out of our apartment, hearing the Puerto Ricans arguing, then we would get on the bus and hear Mandarin, then on the subway you hear English, then you go downtown and you hear people speaking French. It’s a super diverse city. It separates San Francisco. We all learn to contact in multiple languages. I learned how to contact and refer in Mandarin and Cantonese.

The Oakland temple is there and is beautiful. With all of the image that Oakland has, it has one of the most beautiful temples. It’s really big and it is on a hill. Everyone can see it and when we were out there we would remember that we were the light on the hill. When we talked with people we would ask them about the big white temple in Oakland and they would tell us they thought it was a castle. It’s popular there and we would bring people to visit it and it has a wonderful visitors center. It has one of the biggest family history centers or archives on the floor beneath the visitors center. When we would help less actives, we could take them there and they were received with open arms. Wherever you are in the mission, you will be part of a stake. There are lots of members there. I served in two branches and two wards. The membership kind of declines the more exotic the language. There is just one Tagalog ward. Laotian only has two wards in the world and one is in San Francisco. There are at least 100 members per ward I would say. Even the branches have a lot of members.