Here are free resources about the Brazil Cuiaba Mission: 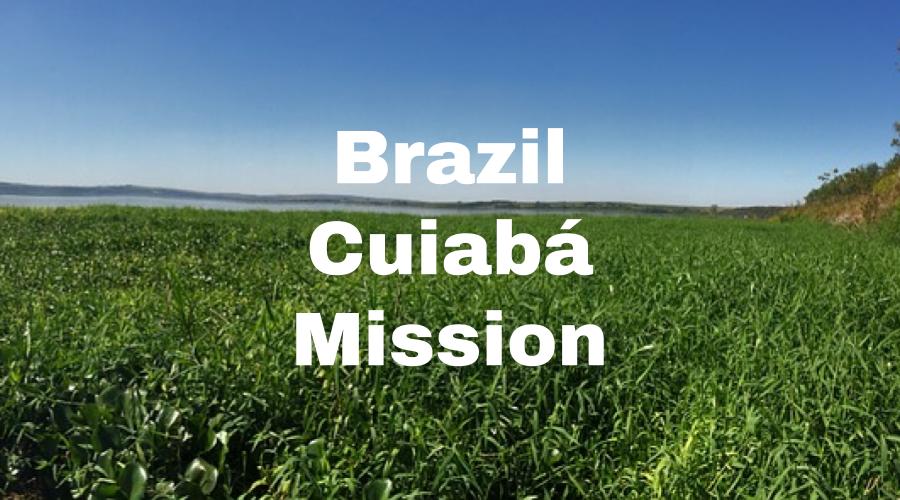 Here’s a recent address for the Cuiaba Mission. We try our best to keep this information up to date, but it’s a good idea to check the mission address with several sources, including your mission packet or the mission office.

Here’s a list of LDS missionary blogs for the Cuiaba Mission. This blog list includes the missionary’s name, URL and when their blog was updated.

Here are T-shirts for the Brazil Cuiaba Mission!

Shirt designs include Brazil Cuiaba Mission logo/emblem shirts and Called to Serve shirts. The shirts make great gifts for pre-missionaries, returned missionaries and missionaries currently serving. LDS Mission shirts come in all sizes: Small, Medium, Large, Extra Large, up to 4XL.  The mission designs are printed on white shirts and are shipped to you.

*Simply click on a shirt design to view the details and submit an order. The designs on mission t-shirts may also be printed on other LDS mission gifts, including: Brazil Cuiaba missionary aprons, Christmas stockings, ties, pillow cases, teddy bears and Christmas ornaments. 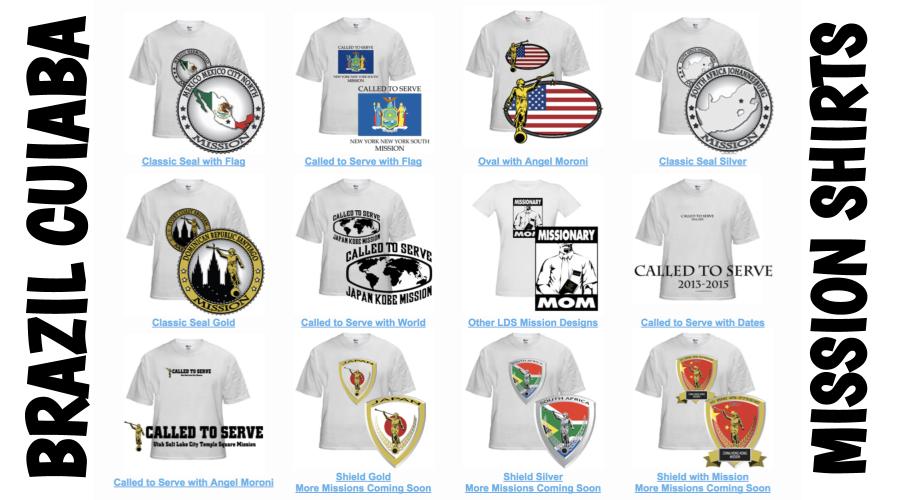 *Click here to see our new shirt design for the Brazil Cuiaba Mission: 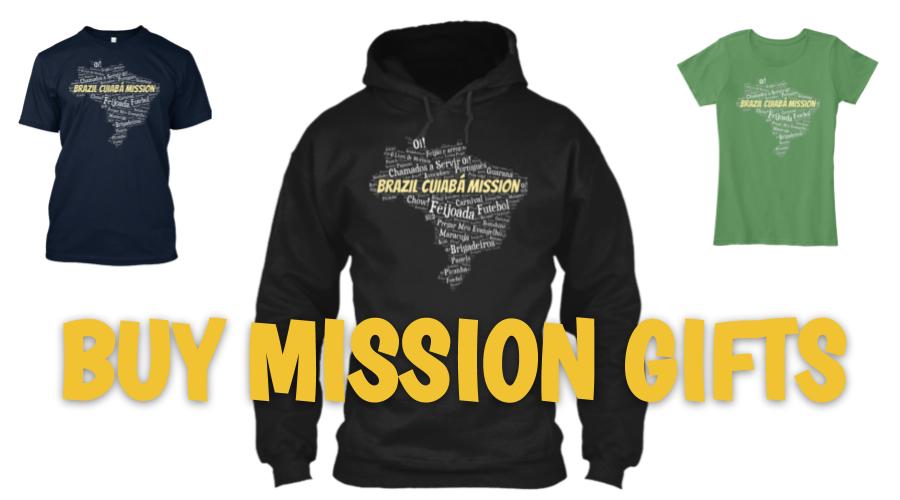 Here’s a list of current and past Mission Presidents of the Cuiaba LDS Mission.

Here are survey responses from Brazil Cuiaba RMs, to give you a snapshot into what it’s like to live in the mission.

What are some interesting facts about the Cuiaba Mission?

The Cuiba mission was created 3 or 4 years before I got there. Before that, it was made up of parts of other missions. Before my mission president came over, my mission included a place called Acre where missionaries had to fly to get to. It was legendary place where missionaries would baptize dozens on a weekly basis. However, when I arrived, however, my mission included parts of Mato Grosso, Mato Grosso do Sul, and Rondonia. These states bordered Paraguay and Bolivia as well.

Culture and Environment in Rondonia, Mato Grosso, and Mato Grosso do Sul

Our area was mainly farming area and then part of the Amazon rainforest in Rondonia. Cuiaba, which was the city in the middle of our mission was one of the hottest areas, while further south in Mato Grosso do Sul it was colder with more cattle farms. Because we served close to Bolivia and Paraguay, we were able to cross into those countries on the border towns. We were able to talk to them in Portuguese and they were able to talk to us in Spanish, and we could understand each other. I had to travel from the top of the mission to the bottom once on a 36 hour bus ride. Cuiaba is the very center of the landmass of South America.

Mission Preparation for a Foreign Mission

Learn Preach my Gospel before you leave for your mission. In the MTC, you won’t have much time to learn the precepts there because you’ll be so focused on the language. One of the most frustrating things for me was not being able to speak to people or understand them in the beginning. If you know Preach My Gospel before you go, you will be more prepared to focus on the language and then on the people.

Fruit and fruit juices were some of my favorite, including açai which is better in Brazil because it’s straight from the tree. They like to make milkshakes or to blend it with ice and sprinkle it with granola and honey. Another one of my favorite fruits was cupuaçu. It only grew in or near the Amazon and was very sweet.

Brazilians also like to eat aalgados, which are small fried pastries filled with meats and cheeses that were kind of like hot pockets. For one version they would use mandioca or plantain flour to make a tear drop shaped “salgado” called a coxinha, and then they’d stuff it with meat. It was common to use plantains to cook in a pressure pot with meat, or even by themselves. Sometimes they would mix the plantain flour with spices and banana to make “farofa” to put on top of rice and beans.

Other fruits include açerola, which is a small berry that grows year round as long as you water the tree. It was delicious, and it contained even more vitamin C than an orange. There was also a kind of blueberry which would grow on trees, but it would grow on the trunk as opposed to the branches. One final favorite treat of mine was Paçoca, which was like a small brownie that had only sugar and peanut butter.

I went hiking sometimes in the rainforest with the members a few time. Machetes were necessary to cut through the grass and the undergrowth. We saw quite a few monkeys, and even a few monkey traps which would cut down. The forest was so packed that you could hardly see in front of yourself. The weather is hot year round, but it is dry in the summer and wet in the winter. Other animals we saw included parrots, eagles, and mccaws. We saw crocodiles as well, and sometimes we would go fishing and caught piranhas.

Most locals lived in concrete and brick houses near the forest. Deeper in the forest there were wooden homes, which were very rare for Brazil. These kinds of homes were built like shacks and were considered poorer. There are also native Brazilians or “Indians” that still live in the rainforest. They were really humble people, and most of them kept to their ancient traditions but welcomed outsiders. We were even allowed to teach people in some native communities.

Rain and Floods in the Amazon

It rains all the time the Brazil. Sometimes there will be flash floods in the streets because of how fast the downpour is, even though it rains for just an hour or two. In other occasions it will rain for days without stopping. Because the rain has nowhere to go, it will accumulate

Public Transportation in Brazil relies mostly on bus and taxi. On the bus they really pack you in, so you have to really start working your way out of the bus way before you got off. In smaller cities we walked a lot more often and people relied on their bikes.

In Brazil there’s social classes. We saw one family who had a bike with 5 people on it. Most poor people don’t have any transportation at all or at most a bike. Middle class families generally had a motorcycle. If you were really well off, you would own a car.

In some areas you have to be careful, especially after dark. We would try to avoid certain areas or side streets at night, but during my whole mission I never encountered problems, only heard stories. As long as we abided by the 9 pm mission curfew, we avoided all problems. Most crime happens at night. Overall, Brazilians are very friendly people and even strangers will go up and talk to you.

Northerners and northeasterner, or “Nordestinos” in Brazil are typically considered to be lazy. Southerners or “Gauchos” consider themselves to be the most educated, and they speak the most proper Portuguese. Easterners from Sao Paulo and Rio de Janeiro are the most cultured, or at least they like to party.

In southern Brazil they drink “Cha Matte” or “Chimarrao,” which is a type of tea. A cup is filled with an herb, you add hot water to it, and then you drink it from a straw. In Northern Brazil, they drink a similar drink called “Tereré.” The main difference is that they use ice cold water or fruit juice.

Another factor that identifies a person is their favorite football (soccer team). There’s a nickname for fans of every team, and those same fans follow their team with almost religious devotion.

A common disease in Brazil in Dengue fever. I knew one missionary who got it and lost a lot of weight and fluids. I only got sick two or three times and at least one of those times was because I drank tap water. Tap water in Brazil is unsafe, and you have to get 20 gallon jugs or filters in order to drink there.

In Brazilian cities it’s first world -they have all the same technology that the U.S. has, and they strive to be like the U.S. in their businesses. Many of them strive to learn English. It gets a lot poorer as you go farther and farther away from the city. Even in the poor areas still have a TV, a car with a sound system, and a cell phone. They just had smaller homes and lower quality of life. The Native Brazilians live the farthest out, and they’re self suficient in producing clothes and food.

For the Native Brazilians we had to talk first with the village elders to get permission to enter and to teach. Most of the older generation don’t speak portuguese, but the children and young adults would translate for us. It was interesting to learn about their religious beliefs. Most of them didn’t believe in God, but in a Great Spirit or in many gods. The experience of teaching people with little or no Christian background or knowledge was very unique.