Here are free resources about the Brazil Brasilia Mission: 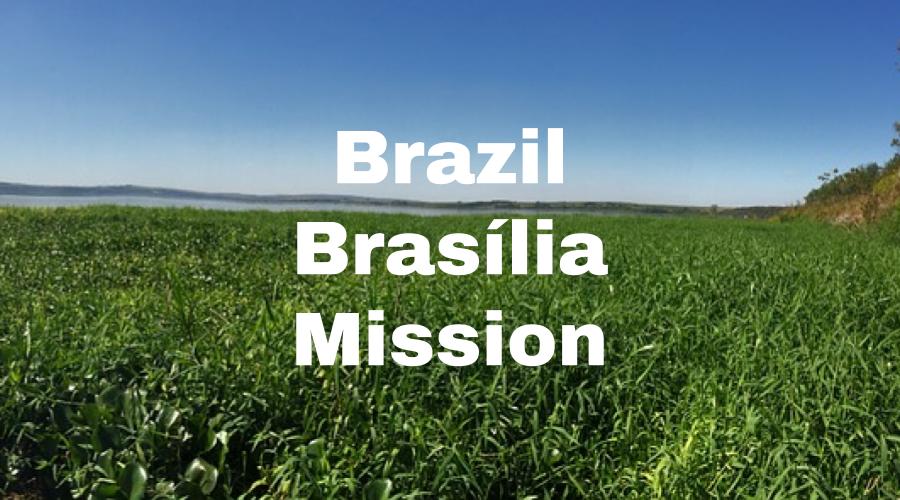 Here’s a recent address for the Brasilia Mission. We try our best to keep this information up to date, but it’s a good idea to check the mission address with several sources, including your mission packet or the mission office.

Here’s a list of LDS missionary blogs for the Brasilia Mission. This list includes the missionary’s name, URL and when their blog was updated.

Here are T-shirts for the Brazil Brasilia Mission!

Shirt designs include Brazil Brasilia Mission logo/emblem shirts and Called to Serve shirts. The shirts make great gifts for pre-missionaries, returned missionaries and missionaries currently serving. LDS Mission shirts come in all sizes: Small, Medium, Large, Extra Large, up to 4XL.  The mission designs are printed on white shirts and are shipped to you.

*Simply click on a shirt design to view the details and submit an order. The designs on mission t-shirts may also be printed on other LDS mission gifts, including: Brazil Brasilia missionary aprons, Christmas stockings, ties, pillow cases, teddy bears and Christmas ornaments. 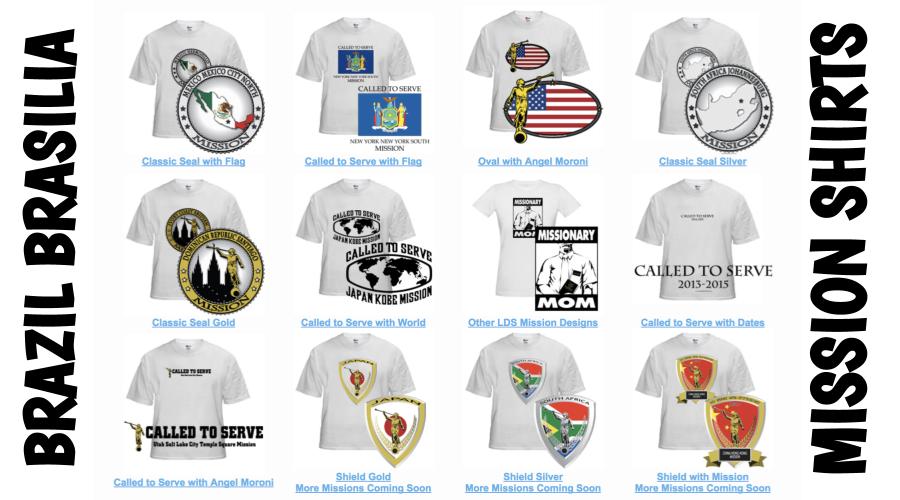 *Click here to see our new shirt design for the Brazil Brasilia Mission: 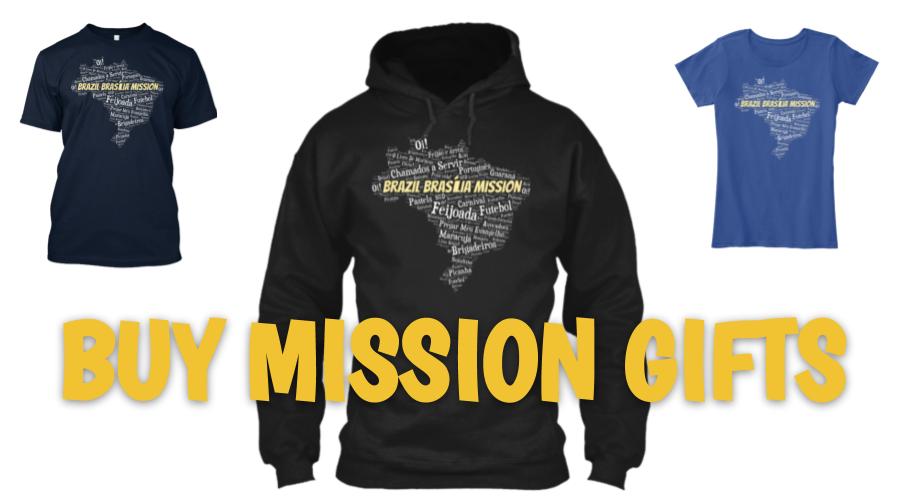 Here’s a list of current and past Mission Presidents of the Brasilia LDS Mission.

Here are survey responses from Brazil Brasilia RMs, to give you a snapshot into what it’s like to live in the mission.

What are some interesting facts about the Brasilia Mission?

Geography of the Brazil Brasilia Mission

Brasilia is pretty centralized, I’d say center-south. The Brasilia mission covers the state of Tocantins, which opened its first stake in Palmas while I was there. The mission also included parts of Goias, and also one city called Unai in Minas Gerais. The Church owns a huge agricultural farm there. Finally, the mission was based in Brasilia, Brasil’s federal district. The mission is long and skinny from North to South. The mission has split recently too, creating a new mission in Goiania. In the cities

For the majority of Brazil’s history, most of the population was along the coast. The inland territories were largely undeveloped. In the 1950’s, the government decided to colonize this area and to build a new capital. Cement trucks constructed roads out into the middle of nowhere, and Brasilia was born.

Brasilia itself is shaped like an airplane, with the northern and southern wings being primarily residential. The body of the plane contains most government ministries and homes for the government officials. There are also satellite cities within the federal district, which were founded primarily to house the original workers.

There is an herb that Brazilians drink called Cha Matte, which they like to drink hot in the south. Normally they’ll pack a cup full with this glass like herb. You’ll drink it through a straw with a filter like spoon at the end so that the hot water can come in and the herb stays out. It was very popular in the southern most state of Brazil, known as Rio Grande do Sul. The people there are called Gauchos, and they will drink this Cha Matte every morning, during the day, and they’ll pass it around to friends. In northern Brazil, they tend to drink the same herb cold. Instead of adding hot water, they’ll add cold fruit juice, including mango juice, lime juice, and cashew juice. Yes, in Brazil they take the fruit part of the cashew and turn it into juice.

In the U.S. Brazilian steakhouses like Tucanos and Rodizio have been on the rise, and many people think that Brazilians eat that way. They do eat those kinds of foods, but that’s normally only for special occasions. In realitiy, Brazilians eat rice and beans every day… it’s not a meal if there’s no rice or beans. Normally, this will be served with salad and some sort of meat. Chicken is common among poor families, while the richer ones will serve beef.

My favorite Brazilian foods are hamburgers, hot dogs, and pizza. They really took hot dogs and hamburgers and ran with it. They put crumbled potato chips, peas, carrots, mashed potatoes, and even more. Their pizza is to die for as well, with pizza buffets very common. You can find any topping on a pizza that you can imagine.

When missionaries need a yummy treat, they would stop and get a Pastel. A pastel is basically a piece of fried dough filled with chicken, meat, cheese, or other savory foods. I would often get it with a cup of sugar cane juice. They would grind the cane right in front of you in a machine and out would come a very sweet, green colored juice.

Lunch is the big meal in Brazil. It’s a much bigger meal than breakfast and dinner. Even the Church won’t schedule meetings during the lunch hour. Church members would prepare amazing meals for the missionaries to eat lunch with them almost every day.

Brazilians love their flip flops. The Havaianas brand is very popular there, and it is actually becoming more common in the U.S. as well. Brazilians will wear flip flops everywhere- in the shower, in the street, at home. The only time they take them off is for church or work.

Climate and Wildlife in Brasilia

I didn’t see to many animals. I saw a monkey and an anteater, and that was about it. Sometimes we would see Tucans flying overhead, but we never got a close look. I think the lack of wildlife was due to the fact that we were basically in a desert. Some animals that I did see a lot of were horses that people would ride, and a lot of chickens in poor communities.

You would wake up in a sweat, it was so hot. Then you’d go outside and you’d be wet again. Then we’d go home, shower, get our clothes moist and sleep with a fan on. Even so, we’d wake up wet again the next morning. The heat is inescapable almost year round.

Brazilians have a hard time saying no. Even if they really don’t want to do something, they’ll still tell you yes. You’ll have to really pin them down to help them really commit.

Brazilians are very emotional people, and they’re not afraid to wear their emotions on their sleeve. Americans tend to be more isolated and standoffish, but Brazilians are really open. They end every letter with the word “abraço” which means hug, so as to say “wishing you the best” or “a hug from a friend.”

A lot of Brazil is Catholic because of Portuguese colonization. In recent years, protestant religions have sprung up to rival the strength of Catholics. Priests and Pastors are very vocal about their churches, as are many others. Brazilians in general are very religious and will talk about their faith more openly. We visited one lady who offered us water who would thank the Lord for her cups, her water, and for our visit. They’re very conscientious of God, and I hope they don’t become more secular like other developed and developing nations.

People will often joke that Brazil is so perfect, and the one challenge that God gave them was a difficult political system. They sometimes struggle with corrupt politicians. For awhile, this has been fueled by the disparity between the upper and lower classes, however, this is changing and the middle class is growing every day. The culture is changing now too… it has become less socially acceptable to accept bribes or circumvent the law. I think Brazil really is improving.

There’s a lot of German influence in Southern Brazil. Some people there speak both German and Portuguese. Italians and Germans would often settle in the cooler, more mountainous regions and use a lot of European architecture.

Mix is common in Brazil. Many people are descendants of African slaves, others of Portuguese as other European descent, and even some people came from Japan. In the same neighborhood, you’ll find people from all different cultures. Some claim that this leaves Brazil without an identity, but I think this diversity is what makes Brazil so great.

Economic status comes in a wide range. I wouldn’t say there’s a lot of poverty like in Africa, but generally the government helps the poor so they don’t starve. But you’ll meet people down from the most poor up to the richest. The upper class in Brazil gets paid a lot -even a lot more than the upper class in the U.S. does. The lower classes often suffer because of this wide income discrepancy.

My advice is to embrace Brazil as it is. Don’t try to compare it to America, because it’s like comparing apples to oranges. Accept the culture and you will come to love it.

Currently in Brazil there’s been a public outcry. This is largely due to taxes over 50% and government spending millions of dollars on World Cup stadiums. I was impressed by the unity and activeness of the Brazilian people in taking a stand against corruption. Hopefully they will continue to grow in awareness and stand up for their rights.

In some parts of Brazil, riots and big parties (such as Carnival) would require that missionaries stay home. These gatherings could get a little crazy or even dangerous. In Brasilia, however, the parties never were too bad, and we could always work normally.