Here are free resources about the Brazil Belo Horizonte Mission: 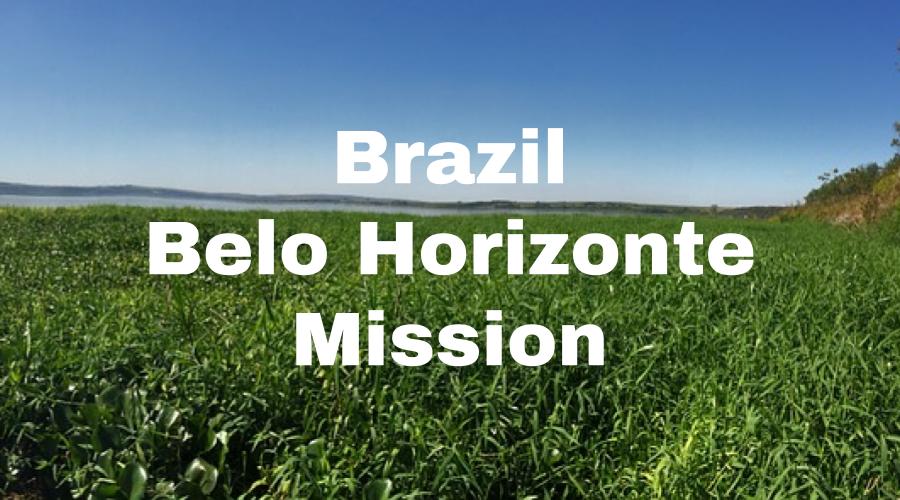 Here’s an address for the Belo Horizonte Mission. We try our best to keep this information up to date, but it’s a good idea to check the mission address with several sources, including your mission packet or the mission office.

Here’s a list of LDS missionary blogs for the Belo Horizonte Mission. This list includes the missionary’s name, URL and when their blog was updated.

Here are Belo Horizonte Mission Groups- for LDS missionary moms, returned missionaries, mission presidents and other alumni of the mission.

Here are T-shirts for the Brazil Belo Horizonte Mission!

Shirt designs include Brazil Belo Horizonte Mission logo/emblem shirts and Called to Serve shirts. The shirts make great gifts for pre-missionaries, returned missionaries and missionaries currently serving. LDS Mission shirts come in all sizes: Small, Medium, Large, Extra Large, up to 4XL.  The mission designs are printed on white shirts and are shipped to you.

*Simply click on a shirt design to view the details and submit an order. The designs on mission t-shirts may also be printed on other LDS mission gifts, including: Brazil Belo Horizonte missionary aprons, Christmas stockings, ties, pillow cases, teddy bears and Christmas ornaments. 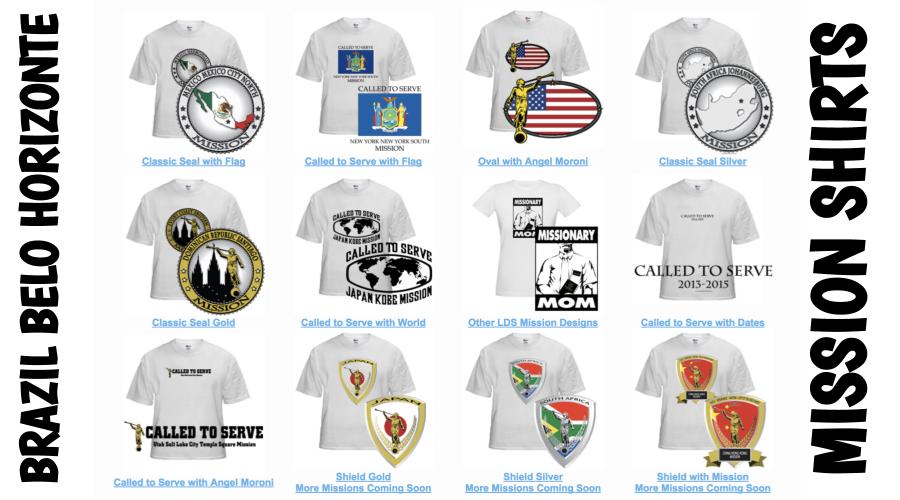 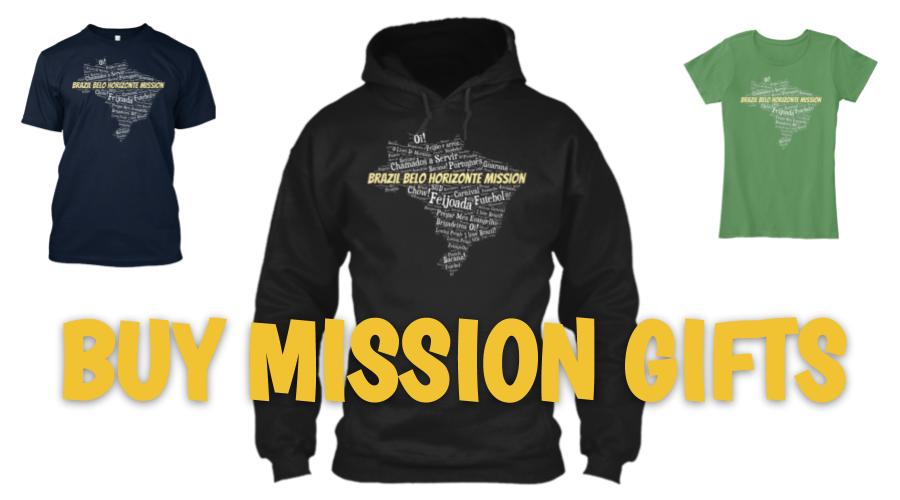 Here’s a list of current and past Mission Presidents of the Belo Horizonte LDS Mission.

Here are survey responses from Brazil Belo Horizonte RMs, to give you a snapshot into what it’s like to live in the mission.

What are some interesting facts about the Belo Horizonte Mission?

Brazil is divided into the states just like the U.S. is. Minas Gerais is the state that I served in while Belo Horizonte is the capital. The Belo Horizonte mission was divided into East and West. The closest temple was in Sao Paulo, Brazil. It was outside of our mission district so we never attended, but the members would take the bus down and spend a week there.

Brazil itself is very catholic country overall, but Minas Gerais is the capital of Catholicism in the country. Members of the Catholic church were very staunch. There was one point where the actual capital of Brazil was in Minas Gerais. There were so many Catholics and other Christians, that we would often start teaching about the first vision. There was one point where we were one of the lowest baptizing missions in Brazil.

People were very understanding and accepting of any message about God and the meaning of life, but it was difficult for them to change their religions, because they came from such a traditional caltholic background. We taught one beautiful young couple when I was there, but when we asked them to be baptized, they said no because they had already been baptized in the Catholic church. They believed every point of the gospel, but they wouldn’t change because of their family’s background. That aspect did make it a little bit different

The Church in Minas Gerais

The climate was fairly humid, but it wasn’t extremely so like the Amazons. Overall, it was very mild. In Belo Horizonte, there were several stakes with wards. However, when you got out to further cities there were branches, usually one or two per city. I served in one small town that was very active, and there was four branches and actually an established chapel in the extreme north.. Most other branches met in rented buildings or rooms above stores. Attendance would vary quite a bit. In the south, there was one branch that was the opposite end of the spectrum, with only 20 active members. Wards had one to two hundred members. Attendance could vary quite a bit, and I got to serve mainly in branches with low attendance.

At the time, we taught set discussions. I was excited with the idea of Preach My Gospel, and I feel that the discussions made it hard for me to relax and focus on the person. One thing I have learned since my mission that it is essential to listen, rather than focus on your own message. It is important to really get to know someone and adapt to their needs. That is one thing that I would have done differently on my mission; to listen to the person and to the spirit.

I started in January of 1995 and went to the Provo MTC. Shortly after the start of my mission, however, the Church started sending American missionaries straight to the MTC in Sao Paulo. I started in a suburb of Belo Horizonte called Santa Luzia, an area that we opened up. After that, I served in Nanuki, the city far north that had 4 branches. After that, I went down south to a city called Governador Valadares. That city was interestin because the ratio of women to men was almost 7 to 1. Most of the men had left to go to America and work. After that, I went back to Nanuki, which was a great experience. After that I moved to another suburb of the capital. Finally, I ended my mission in a city called Barba Sana

Congratulations on your call! You’re going to serve one of the most god-loving people on Earth, and you’ll have no problem talking to them about religion. Don’t worry about learning the language either -there are a lot of people there that will help you, and God will too. I had some great experiences visiting the Brazilian people and experiences that grew my own testimony. You will encounter poverty, but you will encounter a people who are willing and ready to learn. I would love to go back and visit some of the people that I met there.

Nanuque was further North in Minas Gerais, and the northern most reach of the mission. Because of that, it was one of the hottest. Luckily, there was wind to cool you down. The landscape is kind of shaped like a bowl or jello mold, with a giant rock in the middle.

The city was a good mix of rich and poor. There were quite a few people who had nice homes that were finished and had all the necessities. There was one road, however, that had shacks made out of wooden boards, cardboard, and metal. One thing that was really interesting was how every house, no matter how poor, would have a decent tv.

Carnival was big in Nanuque, but not nearly as big as in cities like Rio de Janeiro. So we were able to go out and work normally. One time, I had the opportunity to proselyte in a park and the local newspaper did an article on it. The Church was able to get a lot of great publicity from that in the area.

Governador Valadares was even hotter than Nanuque, and the main reason for that was a huge rock, even like a mountain. The rock would block the wind all during the day, and during the night it would radiate heat. This rock was world renowned, and people would come from all over the world to paraglide down it. It was a great city to meet people from other parts of Brazil as will. Governador Valadares was set up with a central town, with streets spoking out from there. A clean river cut right through the middle. I remember eating a Pihrana there as well.

We helped one family build their home, so I learned more about houses in Brazil. Most of the houses are made out of red clay bricks, which aren’t very sturdy. But due to the moisture and rampant termites, Brazilians have to use this brick. They also use cement to put in between the bricks and for the floors and foundations. Most of the roofs are a corrugated metal. Whenever it would rain, the roofs would be so loud it thundered in the house.

Barbacena had a large concentration of insane asylums, which was very interesting. We happened to live with a nice old lady who had a great house with a washer and dryer (unfortunately, the washer broke right before I got to use it). Across the street was a Padaria -a Brazilian bakery. You can walk into these bakeries almost anywhere and choose from a wide varieties of bread.