Here are free resources about the Arizona Phoenix Mission:

Here’s a recent address for the Arizona Phoenix Mission. We try to keep this information up to date, but it’s a good idea to check the mission address with several sources, including your mission packet or the mission office.

Here’s a list of LDS missionary blogs for the Phoenix Mission. This blog list includes the missionary’s name, URL and when their mission blog was updated.

Here are T-shirts for the Arizona Phoenix Mission!

Shirt designs include Arizona Phoenix Mission logo/emblem shirts and Called to Serve shirts. The shirts make great gifts for pre-missionaries, returned missionaries and missionaries currently serving. LDS Mission shirts come in all sizes: Small, Medium, Large, Extra Large, up to 4XL.  The mission designs are printed on white shirts and are shipped to you.

*Simply click on a shirt design to view the details and submit an order. The designs on mission t-shirts may also be printed on other LDS mission gifts, including: Arizona Phoenix missionary aprons, Christmas stockings, ties, pillow cases, teddy bears and Christmas ornaments. 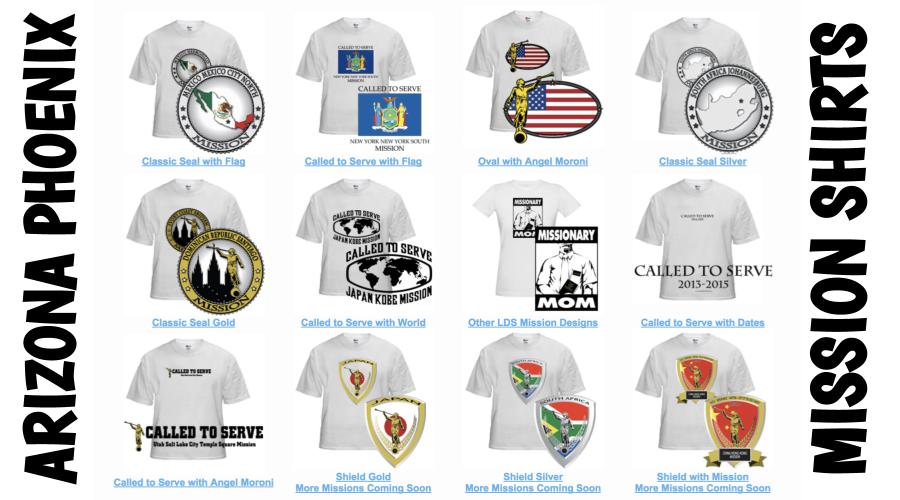 Here’s a list of current and past Mission Presidents of the Phoenix LDS Mission.

Here are survey responses from Arizona Phoenix RMs, to give you a snapshot into what it’s like to live in the mission.

What are some interesting facts about the Phoenix mission?

Most people speak Spanish in the valley honestly. It felt very new to me because so many people were speaking Spanish in the stores and on the street. It felt a lot different than where I’m from in Colorado. Up north it’s a lot more rural and a lot more spread out. It can make missionary work more difficult. I was in one area that was very different and very spread out. It’s the best place in the world. There aren’t a lot of paved roads so you go mudding every day because it rains a lot. No one goes out there so they think you’re crazy because no one does that. Down south near Buckeye there is a lot of farming down there, but other areas down south are more suburbs and more city.

It’s English speaking and Spanish speaking. The summers are really hot, but the weather in the winter is fantastic. In the summer, it will be 90 degrees and sunny and then within a few minutes clouds will come in and it will pour rain and the temperature will go down. If you park your car over a waterway, it can get swept away. If that happens and you have to get rescued, you have to pay for it, because it happens so often.

The amount of people there is huge. Some places have quite a bit of members. My first area was in a city called Surprise. My ward only covered a couple blocks, but the members were fantastic. We usually had a dinner every night with the members, so we got to meet them all and enjoy a lot of good food. It was normal food for me: tacos, fajitas, lasagna, casserole. It was really good. I really appreciated getting to know the members in the ward. I eventually started to treat those member meals as special and important. During monsoon season, my favorite part about the weather was these gorgeous evenings where it would be raining just a little and off in the distance there would be a thunder and lightning storm in the distance.

The wards in Arizona are really good and they do a lot. I feel like the youth were very active in the church and just doing things in general. They were active players in what was going on. The attendance for most of my wards was 200-250 people, which is a lot. In Surprise there is over 50% attendance, but if you go up to Flagstaff, you are on the border of the reservation where about 90% of the Navajos there are members of the church. The teachings of the church really click with them and their traditions. A lot of them got baptized, but not many are active. Attendance there is probably 25%.

The megachurch thing is very big. CCV is Christ Church of the Valley. There is also Calvary Valley. There was another church with a tower in the middle of it and you could walk to the top of it and it was supposed to symbolize ascension. CCV is the biggest one and they sell all of these stickers. Everyone down there is religious, pretty much. And they’re mostly all Christian. There are a lot of Romanians down there. They call themselves Babylonians because they are Christians from the Middle East leaving for obvious reasons, but a lot of them turn up in Arizona. It’s good that everyone has a Christian foundation, but it was a struggle because everyone thinks that they’re right.

Nondenominational churches will have classes on how to deal with Mormon missionaries. I don’t think they taught them tactics, but people felt like they already knew us and they felt like they were above us. We ran into a lot of good people too. The Phoenix mission baptizes a lot. It was third or fourth outside of Utah I think.

The mission goes from Phoenix up to Flagstaff. When I first got there it didn’t include the Flagstaff stake, but there are five missions in Arizona. We would go to the temple in Mesa, but if you’re up in Flagstaff you might have members go to the Snowflake temple. One of the areas I served in was just two miles away from the temple. The entire mission is in the Phoenix temple district I think.

If I Could Serve Again

I started in Surprise and then went to North Phoenix. I then went to Flagstaff when it first became part of the mission and then I went to Peoria and then Prescott Valley.

The Arizona Phoenix mission used to have the Indian Reservations in it, but right before I got there they created a new mission for those. Flagstaff also was removed from the mission while I was there, although it was added back after I left.

My two mission presidents had two very different styles. One was very laid back, while the other was more strict. We averaged between 150 to 200 missionaries, with more in the summer and winter months. The culture there is actually somewhat similar to that of Utah. For one thing, it is close to Utah, and beyond that, it was settled by a large number of early saints. Some areas were over a half hour drive from one side to the other, while others were only a couple blocks long. Besides the descendants of latter day saints, there was a large population of Hispanic immigrants. Most were very nice, and the blending of the cultures created a strong melting pot. Because of these demographics, about a third of the missionaries were Spanish speaking.

Life in the Phoenix Mission

My first mission president aimed to house all of the missionaries with members. While I was there, he succeeded in placing 60-70% in member homes. I liked it because it kept us on our toes… the members were watching. In the mission, there were quite a few cars and even a few trucks for desert areas. If missionaries didn’t have cars, they had bikes or a bus pass.

Weather in the summer was really hot, but it the winter it got pretty cold. It didn’t rain much, but you could tell when it was finally going to. When it did finally rain, it poured. Even more interesting were the dust storms. They can get so bad that you can’t even see your hand in front of your face. Be sure to pack for cold, heat, and the dust!