America’s Influence in the Philippines 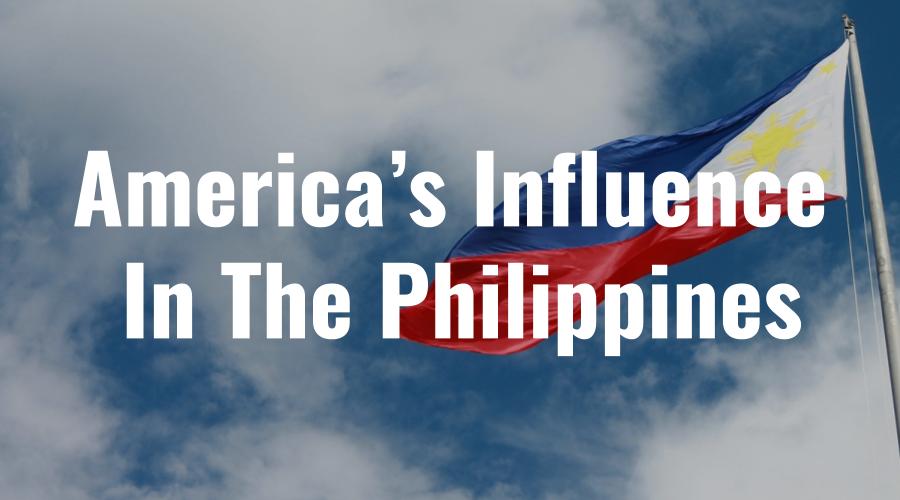 America has had a huge influence on the culture of the Philippines. Here’s a few fun facts as well as a few specific ways in which American culture has influenced Filipino culture.

History of America in the Philippines

In 1898, the United States declared war on Spain, ultimately resulting in what is called the Treaty of Paris, in which the Spanish agreed to give up the islands of the Philippines in exchange for $20,000,000. The Philippines had been ruled by the Spanish for nearly ____ years.  During first years, there were some conflicts between the U.S. and The Philippines. But during World War I, they came together and the Filipinos fought alongside the Americans. After WWI ended, the U.S. continued to rule over the Philippines, and gradually their relationship became much more friendly. In 1934, the Tydings/McDuffie Law was passed, making the Philippines commonwealth of the U.S. The United States agreed to give the Philippines 10 years to prepare for their complete independence. But because of WWII and the Japanese invasion of the Philippines, that promise was not realized until 1946. On July 4, 1946, the United States declared the Philippines an independant nation. Now, the relation between Americans and Filipinos are very friendly and warm. Filipinos love America and Americans. They often decorate their jeepneys with american flags or “God Bless the USA.” They also enjoy American music and clothing, while still retaining their own Filipino way of life.

Here are some cool things you may be interested to know were adopted into the Filipino culture from America.

When the United States took over the Philippines, the people began to be free to join whatever religion they wanted. (During the Spanish rule, the Catholic church was established as the national religion and was strongly enforced). Because of this new found religious freedom, there began to be many different churches besides Catholicism. Today, it’s remarkable to see just how many different Christian churches there are in the Philippines – this religious diversity has become a big part of the culture.

Americans introduced the idea of free education to the Philippine islands. The United States even sent teachers to help establish schools where the Filipino children could have a free education. A large group of these teachers were called “Thomasites,” named after the boat that they came on, called Thomas.

During this time, English began to be taught in the schools, and this is the language that the teachers would use. Even today, most Filipinos can’t help but mix in English words when they speak.  “Taglish” has literally become part of the culture.   In fact, English is now the 2nd national language. Lots of English words have made their way into the Tagalog language. Often they are pronounced the same, but the dictionary spelling is Filipino-ized. Here are a few fun examples:

Here are a few types of clothing that America introduced to the Filipino culture:

Here is a list of some of the food that Americans introduced to the Philippines that have been widely adopted into their lifestyle:

Some American restaurants that have become very popular in the Philippines are:

Very nice! It helped me to finish our thesis thank you. 🙂

Being LDS is awesome and reading this stuff in school is really neat.

– Majority of Filipinos listen to 80% American/English songs and 20% OPM songs. That’s from decade 60’s to date. If it ain’t black and he/she sings and mimic the performances of Frank Sinatra, Patti Austin, Bryan Adams and Beyonce, then probably he is a Filipino.
– Less educated or even uneducated Filipino will understand and can speaks basic English. Most are just shy when they avoid speaking English. Behind her are Filipino grammar nazis.
– Code-switching the local language with English whenever it’s convenient is very common. Taglish in Manila, Bislish in Cebu. English word is used when it has none, awkward or somewhat very medieval local equivalent.
– Filipinos who were born beyond decade 70s mostly have English first name, retaining the Spanish last name by law.
– If you want to experience pure Asia, choose not the Philippines. If you like a unique Asia, and witness the embedding of Spanish and American culture in Asian culture, then welcome to the Philippines. Mabuhay!!!
– I am commenting as a Filipino who have been to eastern Asian countries.

I am from Scandinavia and have been married to a Philippine lady for 6 years, been to Davao twice plus some of the tourist centers, Cebu, Palawan Eden park etc. We plan to move to Davao City from the Cook Islands where we live and work, I love the Philippine attitude to life nothing is impossible everything they do is always done with a smile you become part of the family as soon as you step on their soil and receive a great big MABUHAY!

Over 80% of the culture of the Philippines is predominantly European western. Influence from USA and over 20% of the Western European culture is mixed with Hispanic culture heritage from Spain. 92% of the people listens to Western music, admire dancing, eating Western foods like hamburger and chicken with rice 80% of the Filipinos have Spanish surnames and over 95% of them have English given names as for religion it is dominantly catholic over 92% of the population is Christian they also had same attitude with Latinos like Mexicans with American mindsets and had Asian politeness like Japanese and friendly with a sense of humor

Thanks this helped a lot, I was working on a project for school and was really stuck but this helped me out so thank you.

how did the americas introduced their sports to the philippines?

Thanks for a lot of knowledge.
Helped my homework

through the education that they have given us filipinos

You know right that we the Filipinos lost our national identity thanks to them, by pretending to be our ally against Spaniards we were just a property to them waiting for a new owner.

thank you so much! you website helped me in saving up my money. very thankful!!! 🙂

Is it also them who introduced shopping malls to us Filipinos?

Thank you this helped me finish my activity.

1. What are the agricultural contribution of spaniards, americans and Green revolution to philippines….

Thank you for this information😊
You helped me a lot